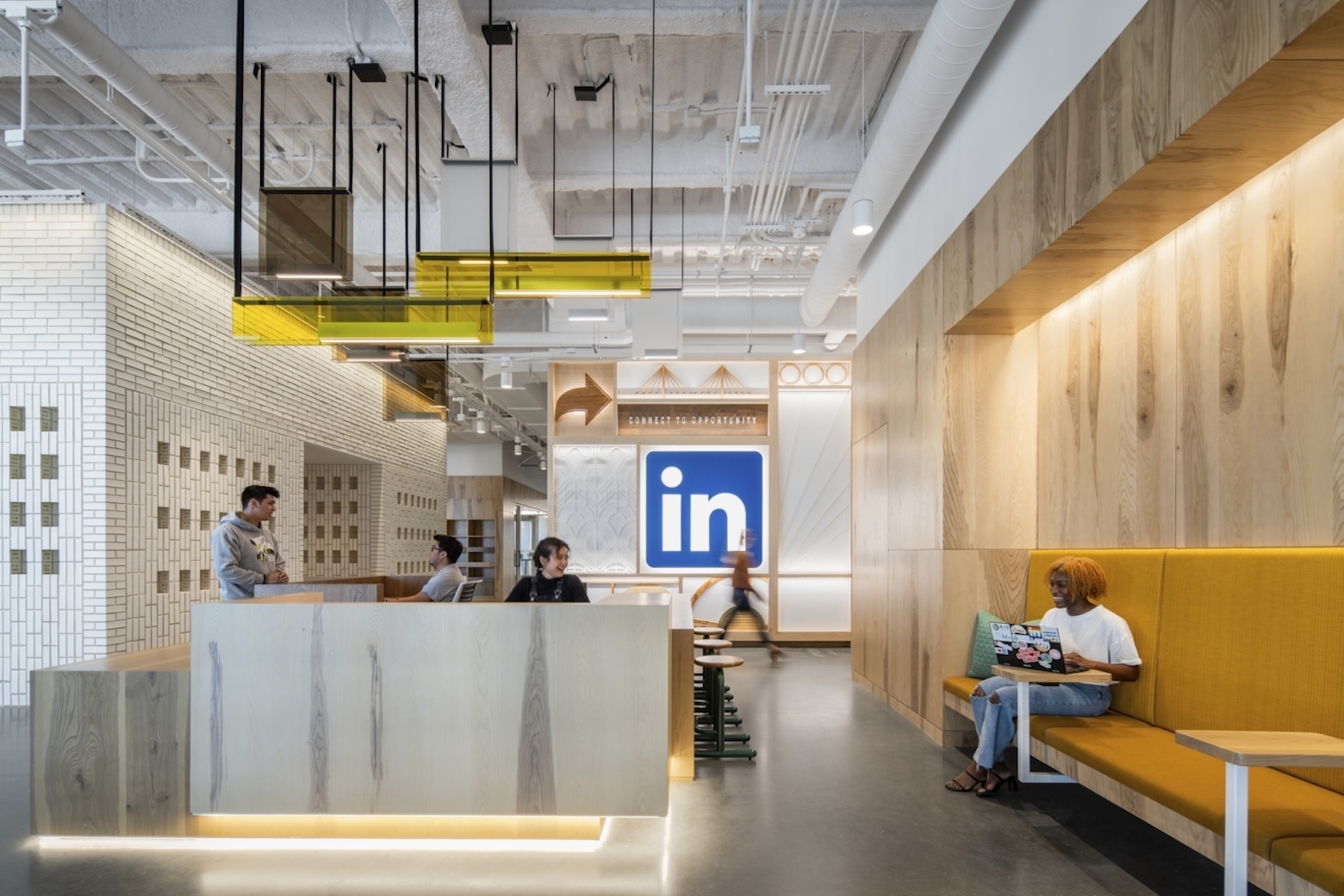 Who says there’s no such thing as a free lunch? A food court stocked with free food is just one of the perks for employees to enjoy at LinkedIn’s new Omaha office. There’s also a gym, walking trails, art and unique spaces designed to spark collaboration and innovation.

The world’s largest online professional network has come a long way since first opening its doors in Omaha in 2007 with just 11 employees.

The 200,000-square-foot Complex, located at 132ndand Pacific Streets, is now LinkedIn’s fourth-largest work base in North America. Miller Electric’s work on the project began in October 2020 and wrapped up in November 2021.

“There were a number of neat aspects to the project,” says Adam Goodwin, low voltage general manager. “Meetup spots, creativity nooks, a music room and resting rooms are just a few features that stand out. They also have solar canopies in the parking lot that provide 13 percent of the building’s power.”

That’s just one of the features that contributed to the building being both Fitwell- and LEED Gold-certified.

The building also features “neighborhoods,” which are shared spaces employees can use to collaborate in groups or grab some focused time alone in a distraction-free workspace.

LinkedIn employees can enjoy chef-made meals and fun spaces to collaborate and enjoy each others’ company.

Project success always requires problem-solving. The global COVID-19 pandemic introduced unique problems to solve in order to finish on time and within budget.

“The job was tightly bid and our schedule was hampered by early delays,” says Miller Electric Project Manager Larry Lange. “That made execution very challenging as timelines were compressed for all trades. That compression became even more of a factor given the many unique light fixtures and controls featured in the building.”

Thankfully, Miller Electric’s use of BIM and Prefab provided efficiencies that helped the entire team make up for delays and deliver on project requirements, which included the entire electrical scope for the core and shell of the building for:

While there were routine electrical requirements, there were also a number of unique installations.

Lange says the project featured a high-tech, state-of-the-art workplace analytics system from VergeSense that was exciting to install.

“The system monitors and tracks occupancy data that provides better understanding into how to maximize the workplace for usage, seating areas, conference rooms and individual workstation usage,” says Lange. “Sensors throughout the building provide deep learning for an ever-changing occupancy flow.”

Because of the system, LinkedIn is able to make its new space extremely efficient and helpful for its employees.

The most critical factor of any jobsite and its resultant facility is safety. It’s the foundation upon which productivity, efficiency, benefit and everything else are built. Miller Electric’s Adam Goodwin says the LinkedIn building offered the opportunity to install DAS and public safety antenna systems, which extend safety features in emergency scenarios.

“In any building there are dead spots where first responder radios and cellular signals may not reach,” Goodwin says. “Near the end of the project, we tested the entire building for dead spots and were able to install a public safety antenna system in the parking garage.”

The new building was the latest chapter in an ongoing story Miller Electric and LinkedIn have been able to write together.

“We’ve done several projects for LinkedIn prior to this new building,” says Lange. “It’s always a joy to work with our talented construction, architecture and design partners as well as a thoughtful and appreciative client like LinkedIn.”

We look forward to the next opportunity to work together and are proud to have been part of hard-wiring such a successful project in Omaha.