Building for Omaha’s Future With the Omaha Electrical Training Center 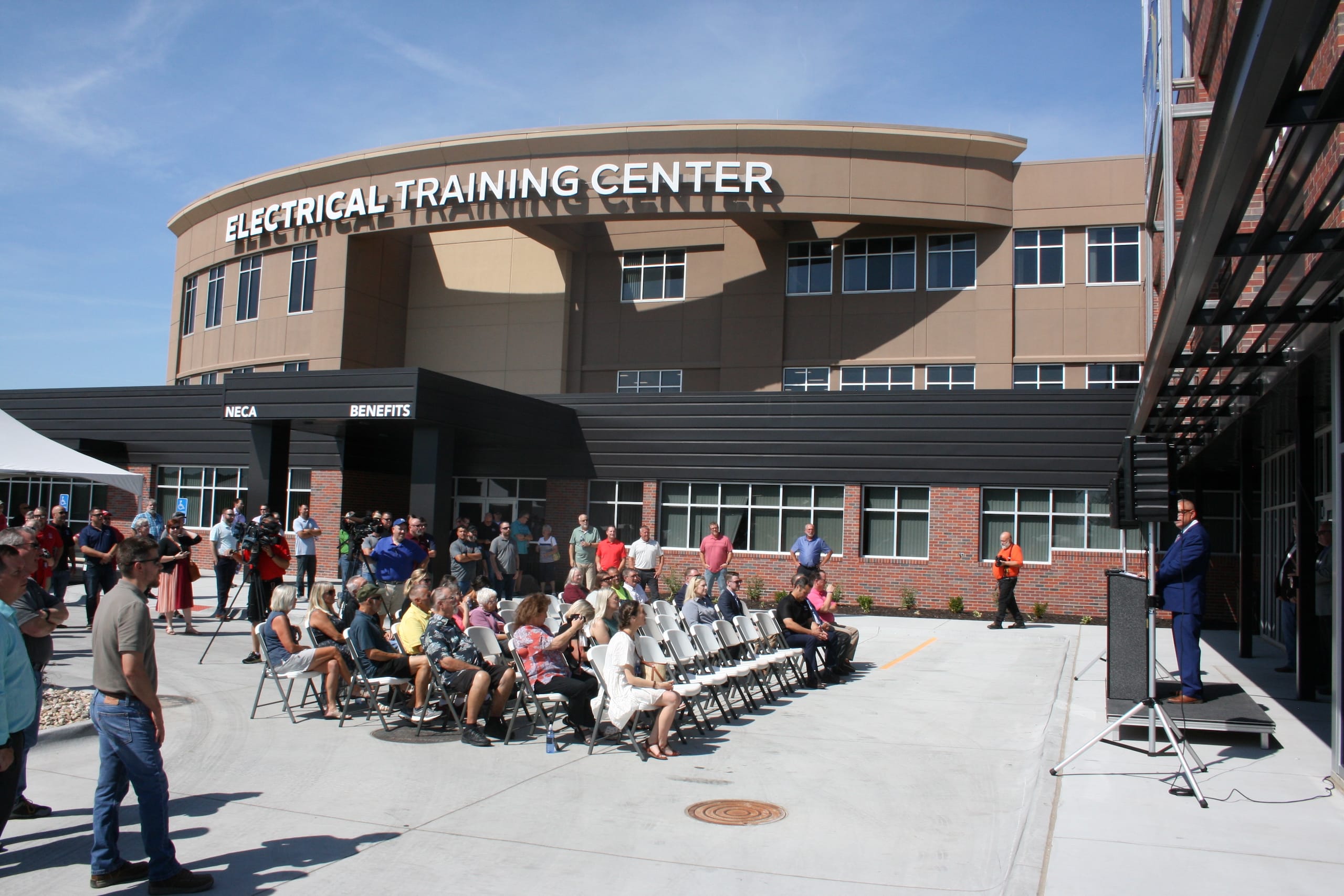 Across the country, ask anyone in the commercial electrical contracting business and you’ll hear a familiar story — there is a severe shortage of highly skilled, qualified electricians.

And unfortunately, just like in communities across America, that’s the case here in the Omaha metro area as well.

But at Miller Electric, just like the city we call home, we don’t coast. We’ve written about our partnership with the OJEATC in the past, and it’s a partnership we’re proud to continue investing in.

We were on-site a few weeks ago for the ribbon-cutting ceremony at the Omaha Electrical Training Center. This ceremony was the culmination of the Building Omaha campaign, a partnership between NECA and the IBEW to draw attention to the facility and expand electrical recruitment efforts. The ceremony unveiled a significant expansion at the training facility, which will support the effort to train skilled electricians in Omaha. It’s a long-awaited upgrade to the training center that has been the OETC’s home since 2002.

In the past, the Omaha Joint Electrical Apprenticeship Training Committee has been constrained by the size of its facility. Although there’s a clear need for more electricians in the community, there simply hasn’t been the space to accept and train all the applicants the OJEATC gets each year.

“In our original space, we used to only be able to take 90 applicants a year,” said Kevin Wetuski, the OJEATC’s training director. “We usually get around 400 applications, so we were having to turn more than 300 people away every year. With our new space, we’ll be able to accept twice as many apprentices each year, training up to 700 students at a time.”

And according to Dan Henk, Miller Electric’s low voltage project manager for the Omaha Electrical Training Center expansion, this will be a situation where the rising tide lifts all boats.

“With more opportunities, we’ll have more room for growth,” said Henk. “Ideally, this is the kind of facility that will bring new electricians into the community,” whether that’s by drawing them to Omaha from other communities or by helping high school students see themselves pursuing a career as an electrician.

The ribbon cutting ceremony in August was the official opening of the center’s expansion, but it’s been in progress since October 2020. Hampered by pandemic restrictions and supply chain issues, the project took longer to complete than first anticipated, and some work is still ongoing, to be wrapped up in the coming months.

But the opening couldn’t have come quickly enough, according to Wetuski.

“On average, more than 70,000 electricians leave the industry each year, usually through retirement,” he said. “But we only see about 40,000 people becoming electricians a year,” leaving the electrical industry increasingly shorthanded.

Because the apprentices enrolled in the OETC’s training program are already working for electrical contractors in the area, such as Miller Electric, the investment made in their training will pay off in an expanded labor force for local electrical projects.

A Partnership That Continues To Pay Off

Miller Electric is proud to have been a part of bringing this new, state-of-the-art training facility to life.

A number of local contractors collaborated on the project, working together to complete the expansion. Miller Electric’s involvement included installing all the low voltage cabling and data runs, as well as donating safety equipment that will be part of a permanent display for future students’ apprenticeships.

According to Wetuski, Miller Electric will continue to see the long-term benefits of its collaboration on this addition and ongoing partnership with the OJEATC.

“Miller is the biggest contractor” sending apprentices through the program, according to Wetuski. “And they keep their workers.”

Here’s how Miller Electric Executive Vice President Roger Knobbe views the expansion: “The new facility very much represents a continued commitment and partnership between NECA, IBEW and the OJEATC. We are excited for the many opportunities it brings to our current and future workforce.”